In a Shop-Ware series honoring Women’s History Month, we begin with the story of Carolyn Coquillette. She is the founder and CEO of Shop-Ware, the industry-leading shop management software.

When I first moved to California, I applied for a job as a mechanic at an auto repair shop in Berkeley. During the interview, the owner asked me if I had ever worked with “real men.” I had worked at two shops in Michigan, where I was surrounded by men for sure, but were they “real?” Had they made me feel deeply uncomfortable in some way that this person was warning me about? No. They had been amazingly supportive to the point that I was pursuing my career across the country, seeking new technology.

People often ask me what it’s like to work in such a male-dominated industry.

They want to talk to me about being a woman. While I’m definitely a feminist and encourage diversity in our trade, I don’t think of myself as being different. I’ve worked at many auto repair shops and I’ve operated my own shop for 14 years. The story about the interview in Berkeley is one from a short list of experiences I’ve had from people suggesting that I was out of place. On the whole, I’ve worked with kick-ass, deeply inspiring people. Most of them are men.

I ended up getting a job at an engine and trans swap shop in Oakland. There were seven lifts, a few flat bays, a front office, and one locker room. I was definitely the only woman, but I was just a piece in the rainbow. The lead tech was a white guy born in the United States while there was a journeyman from Kenya. Most of R&R was done by three men, two from Mexico and one from China. The two guys in the front office were from Iran.

When I started, everyone watched to see if I could fix cars.

Several repairs later, Miguel came over to recommend that I get latex gloves from WORLDPAC and should check them out (latex gloves weren’t a thing in Michigan). He had soccer games running on a small television in the background and when someone scored, we would all yell GOAL for about 10 seconds, several times in a row, mimicking the announcer. Miguel could swap a 22-RE in 90 minutes. They would pull the inboard CV joints from transaxles without removing them from the hubs, leaving them to dangle with the struts strapped back to the hoist posts. The pry bars were never far away. I learned how to rip cars apart without mercy.

Fixing cars is amazing. People who fix cars are amazing.

Starting my next chapter

I ultimately left to work at a woman-owned shop in Sonoma County. I had a shaved head at the time and was pretty unapologetic. We didn’t replace transmissions with dynamite there, but we cranked out the gravy work with a vengeance.

I got my hands on some hybrids, bought a Mastertech and a Pico, and kept an article about evap diagnosis by Dan Marinucci printed out for repeated reference. I wanted to be the best technician in the world and spent hours a week on iATN. Once I felt I had enough timing belts and been through Up Your Voltage, it was time to be dangerous and go out on my own.

The first attempt to build an auto shop app

Maria taught me how to take care of customers. She trained me on how to run an honest business and that current methods of documenting auto repair were subpar. I found a space in San Francisco, hung a sign, and called it “hybrid specialists.” I then paid a developer to build an auto repair software that would allow us to run online and paper-free. The whole thing barely worked, but we were rich in good intentions.

Maria also introduced me to the owner of a parts store in Petaluma who had connections to Pacific Auto Parts in San Francisco. Once we had lunch and it seemed I wasn’t a jerk (I had also grown out my hair by then), he put in a good word so that I could get an account to order parts. There was a misogynist who worked around the corner that once commented our uniforms are “cute.” He suggested we didn’t actually work on anything and the shop was just for show. But, other than that, it was largely uneventful gender-wise.

Believing in the power of hybrid cars

A tool truck guy in Petaluma told me that all the work in San Francisco was clutches and brakes, and hybrids didn’t use either. He was bitter because he had previously owned a shop in San Francisco that went out of business. Fortunately, he turned out to be wrong and hybrids broke just fine.

Taxis were going hybrid, thanks to a city regulation that allowed taxi owners to charge a higher “gate” fee (for use of the car, paid by the driver) for hybrids over conventional cars. Even though that meant the cars could be less attractive, drivers made up the difference in the cost of the gas and then some. The upshot: more money for the taxi business meant less money for oil companies.

The taxi business has every color under the rainbow, like the swap shop in Oakland. Even though Luscious Garage had a crazy name, folks appreciated having a place to go that was background agnostic. We swapped a lot of Prius engines and trannies at 2 a.m. The taxi business is gone now but there are still plenty of hybrids and our daytime shift kicks ass.

This is a short bit of my history. Many thanks to everyone that has helped me get to this point in my career, both women and men, all different colors and creeds. My journey continues, and I’m grateful in advance for your contributions toward these next chapters. 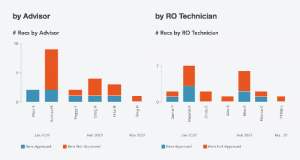 Inspire Your Techs with the Right Car Mechanic Software

Your car mechanic software has the power to make your autor repair technicians more productive as a vital part of your auto repair shop management system.

Leading Your Auto Repair Shop Through the ‘Next Normal’

Leading your auto repair shop through changes in the automotive repair industry requires a set of tools to help your technician team grow and change.

6 Excuses Why Shops Have Not Embraced an Automotive Apprentice Program

You may agree or disagree with these reasons why only a small percentage of shops have not implemented an automotive apprentice program.