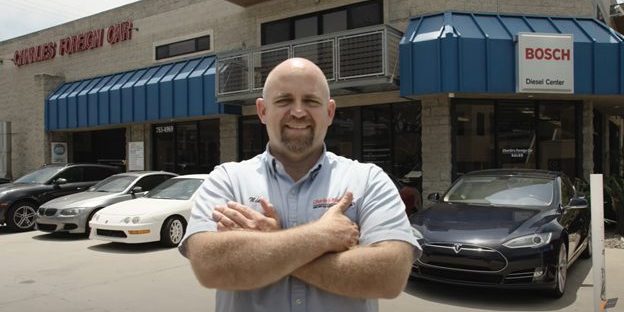 Last month, Derrick Delaossa found himself as the lone service advisor working at Charlie’s Foreign Car. While his colleague went away hiking, he pumped through estimates on 400-plus cars, thanks to the best auto repair software.

“I couldn’t do the volume I do without Shop-Ware’s shop management software,” he says.

Derrick has worked behind the desk for 14 years, two of them with Charlie’s in Encinitas, California. After a year of using Shop-Ware, he wouldn’t want to work without it.

Charlie Sougias opened his shop at age 20 on Valentine’s Day 1978 and it quickly became an award-winning cornerstone of the community. In 1987, he earned the honor as the first Bosch Authorized Service Center in the United States.

A year later, he and his wife Shelly expanded the business at a state-of-the-art auto repair facility nearby. Their son Niko took over the shop six years ago.

The shop specializes in BMW, Mercedes, Volvo, Porsche, Audi, Volkswagen and Japanese makes, such as Honda, Nissan, Toyota and Mitsubishi. They also work on Ford, Dodge, Chevy, GM and Chrysler cars and trucks.

“Chances are if it has an engine, transmission and tires, we work on it,” Niko says.

These days, the shop has:

The staff includes two service advisors and a shop foreman.

Derrick proudly points out the shop’s ARO rides around $772 as he wrote $204,000 in repair orders over the past month. He quickly pulls up those numbers thanks to the automotive repair shop software’s analytics.

The business’ car count runs between 450 and 500 cars per month, sometimes up to 600. Meanwhile the car count dropped to 411 while his coworker left for his hike. Yet, Derrick’s ARO clocked in at $914.

Derrick credits the shop’s success to three factors: its size, how it’s built and its location, in a wealthy area along the coast between Carlsbad and Santa Fe. The beach sits just a block away.

“If you compare us with 100 shops, not many could come close to those numbers with our staff and the number of cars we do,” Derrick says.

“Here at Charlies, we have stayed ahead of the curve by being proactive with tools and training,” Niko says. He hosts regular auto repair video sessions where he shows how to fix a part or use a certain tool.

All along, Charlie – and now his son Niko – have worked closely with top auto repair specialists in Europe. Parts get shipped back and forth to tap into their expertise with German cars in particular.

Derrick remembers manually building estimates on paper with no integrations to speed up the process. He had heard about Shop-Ware before Niko invested in the summer of 2021 in the best auto repair software he’s seen.

A friend had directed Niko to explore Shop-Ware as he was looking around for a new cloud-based shop management system.

“It’s useful for us for our size, our volume and pushing the number of cars we do,” he says.

“I like the use of tablets,” Derrick says. “Communicating with techs keeps me from running back and forth in the shop.”

He jokes that he used to run around “like a chicken with its head cut off” but these days he simply stays in his chair.

However, his boss loves the repair shop management software for how it works with the accounting back end. Above all, Niko uses the automotive repair shop programs to customize reports. For example, he breaks down how much profit arises from brakes, accessories and even coolant.

Since signing with Shop-Ware’s mechanic shop software, Charlie’s has seen increases in its:

“The integration and efficiency of everything makes my job easier,” Derrick says. “It helps me build estimates and communicate with everything the car repair program offers: text, email and messenger.”

The shop does far more than just fix cars. It plays host to Encinitas Cruise Nights the third Thursday of each month, serving up tacos or wine while a live band plays.

The shop has a “great vibe,” Derrick says. The crew works together well and has fun as a group. 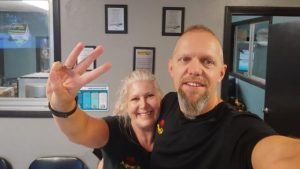 Sheri and Bill Granger pride themselves on offering a great auto shop customer experience at their Mr. Transmission shop in Bradenton, Florida.

Precision Imports uses automotive repair business software to track success in its shop and to add auto repair software to its second shop.