Not every day does a shop owner take over the demo of a shop management system at the ATI Super Conference. Yet, that’s exactly what Shop-Ware champion Eric Gibson did last month.

“Everybody knows I use Shop-Ware,” Eric says. “At the ATI Super Conference, I told my 20 Group, ‘Let’s go talk to them.’ Everybody at the booth was busy with people so I asked if I could jump in and show them.”

At first, Eric walked them through the basics and showed them how easily the system works.

“I told them, ‘Don’t compare it to others. It’s built better. Don’t look back.’ Their eyes got big when they saw what it could do,” Eric says. “Now they are doing demos and I’m getting calls since they are asking more questions.”

How did a former fleet manager for an energy company land here? Well, that’s another story altogether.

Andy Eberstadt started 5th Gear Automotive in 1982 in a small three-bay shop in Northglenn, Colorado. Over time, he moved his shop several times as it grew with his customer base. Ultimately, Andy set up in his new from-the-ground-up auto service structure in nearby Broomfield in early 2001. He built his thriving business on the principles of honest pay for honest work.

When it came time for him to retire after 35 years, Andy sought someone with the same outlook. He interviewed prospective buyers to look for a good fit for his legacy and hit it off with Eric right away.

Eric started out tinkering in his parents’ garage in northern California to help pay for his first car, a 1966 VW Bug. He worked at local shops before managing the fleet and 32 natural-gas stations for the Pacific Gas and Electric Company. The job took him from doing lube jobs to traveling around to lead technicians at 62 separate garages.

After nearly 20 years, he and his family wanted to switch gears. Unable to afford a shop in California, Eric and his wife decided to move closer to his in-laws in Colorado.

Eric had dreamed of having his own shop and, with Andy retiring, the timing worked out just right. He took over the shop at the start of 2017. Today, he works with a staff of 10, including two techs, two service writers, a parts specialist and three apprentices.

Getting organized in the shop

“At first, I knew it all,” Eric recalls. “Then it took me 15 to 18 months to figure out that I didn’t know how to know how to run a business. I knew how to fix cars but it’s not the same.”

Humbled, Eric learned to admit he needed help and how to ask for it. He hooked up with the Automotive Training Institute. From there, he learned how to get his head out of the shop and into a business mindset.

Since Eric took over, the shop became more efficient thanks to a better workflow. He reorganized the parts room so everything is sorted by number so techs can find things more quickly. He put the tools in one area and removed old racks.

Investing in a shop management system

Next, he decided to replace the shop management system that Andy had used since 2004. He suspected that some techs were not always completely honest about when or if they had ordered parts. Without a digital trail, Eric couldn’t tell.

He admits that he was nervous at first about changing. After trying another system, he invested in Shop-Ware in January 2020, once he learned of its integration with Parts Tech.

“Shop-Ware shows almost every keystroke,” Eric says. “It’s easier to use all around. My accountant absolutely loves it. After 30 days, she started telling other auto shop clients to switch since she can do filings in half the time.”

It also helps him keep order in the shop since there’s no paper and no paper holders.

“We lost more keys with paper ROs than I would like to say,” Eric recalls. “Now, everybody knows where to find everything.

After all these changes, one thing remains in the shop: a sign that reads “Legacy Over Currency.

“That’s what we really stand for,” Eric says. “When my kids look me up on the internet, I want them to see that Dad did it right.” 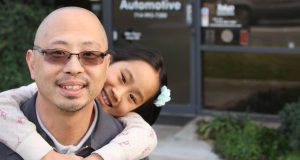 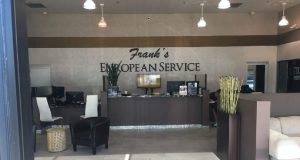